Amazon Alexa vs Google Assistant – which would win in a game of chess? 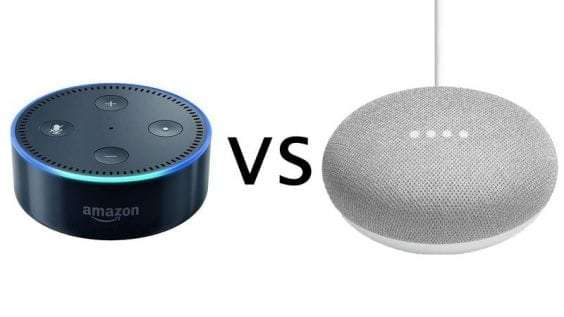 Shortly after we had started work on our Alexa app, Google announced the release of the Google Home Mini, their attempt at competing with the Amazon Echo.

Not being the first to market, Google had the opportunity to react to the response Amazon got with Alexa. With their extensive portfolio of partners and purchased technology companies, including API.ai (now Dialogflow) – big contributors in conversational voice systems, Google was in a very advantageous position to compete.

Our first plan upon receiving the Google Home Mini was to essentially replicate the same Chess Mate App Skill that we had built for Alexa, however, due to time constraints, and the infrastructure of the existing Skill being very much tied in to the constraints of Alexa, as we discussed in our other blog, we decided that Google Assistant should instead challenge Alexa to a game of chess.

The workflow for the Google Assistant Action was significantly simpler than that of Alexa. We didn’t need it to understand chess moves, or many intents (the name for voice commands within the app), it simply needed to start the Alexa Skill, wait for a response, and then calculate the move to pass to the Alexa game.

After discovering the inability to create a true conversational experience with Alexa, we were delighted to find out that Google Assistant does support conversational flows. This was probably the largest factor we have discovered that separates the two voice services, giving Google significantly more potential for true interaction and a much larger variety of potential apps.

The process of setting up the intents, testing and debugging was significantly easier than with Alexa, partially because we had already set up Alexa and were in a voice-interface headspace. We needed to read minimal documentation in comparison to Alexa, Google either just worked as expected, or gave a nice error message which made it obvious what we would need to do.

As we discovered during the testing of the Skill, Alexa regularly misunderstands what is said to it and tends to generalise what it thinks you said. This is to be expected to some extent as accent and tone of voice vary from person to person. However, we found that when getting Google Assistant to talk to Alexa no matter how non-human, precise and consistent Google’s speech is, Alexa still inconsistently fails to understand something. Adjusting the timing and emphasis of Google’s speech responses using the SSML (link) was key to slightly improving Alexa’s understanding.

Whilst voice technology as a whole is still in its infancy, Google seems to have established a good set of standards, tools and APIs for developing conversational interfaces with or without Google Assistant. The APIs are flexible and can be used however you want, tieing into other third-party integrations including Slack, Skype and even the Microsoft voice assistant Cortana.

Additional languages and any issues with understanding people’s voices will be ironed out as more and more people use voice interfaces, constantly training the Machine Learning models used to understand you.

Practical applications of such voice interfaces may be elusive today, but as smart home automation is more commonplace, and as users are more familiar with using these sort of interactions on their phones, the potential for interesting and challenging applications of the technology will continue to expand.

If you have a great idea for a voice interface for your product or business, get in touch and we can have a chat about your options.

Get in touch about your idea

Get inspiration in your inbox

Don’t miss out, get our tips, how to guides and news straight to your inbox. Our occasional emails have a one-click unsubscribe if it’s not for you. Want to give it a try?

Make my website number 1 on Google
Scroll to top